It’s been ten years now since I started compiling a “Team of the Season” at the end of every regular football season. Come late May or early June I reflected upon the season and about which players impressed me the most. Who did perform the best both in terms of quantity and quality of performance? Then I tried to squeeze the standout performers into a realistic (or semi-realistic) formation and added a bench with players who narrowly failed to make the cut. The objective was always to chronicle the exploits of those players who performed the best. This objective, at least partially, sprung from the realization that football awards do not adequately fulfill this task.

END_OF_DOCUMENT_TOKEN_TO_BE_REPLACED

Leaving ter Stegen on the bench was probably the hardest omission in the 17-18 Team of the Season. He was already great last season but de Gea just edged him out. This season things look a bit different. De Gea, for one, played much worse, emulating his World Cup rather than last season (especially during the final months of the season). And ter Stegen – well, it might even be true that his 18-19 was just a little bit worse than his 17-18. This may sound pretty negative but it is not meant that way: ter Stegen’s 17-18 was breathtakingly good and if his 18-19 is almost as good it must be brilliant as well.

END_OF_DOCUMENT_TOKEN_TO_BE_REPLACED

Best Player: Mbappé (but see below)

The selection is, as always, based on quality and quantity of performance alone. This is about who played the best (not the most iconic, memorable, most improved, etc.).

END_OF_DOCUMENT_TOKEN_TO_BE_REPLACED 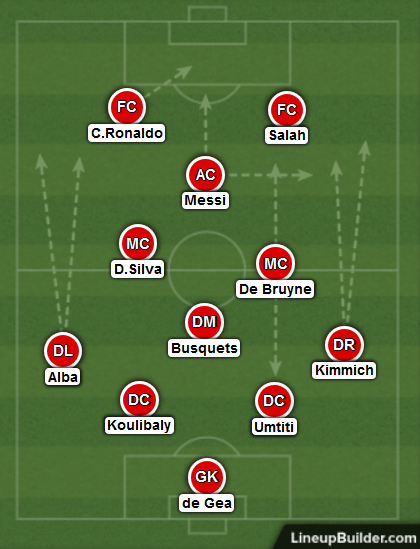 Some people have approached me saying that it would be nice to have an overview over the Teams of the Decade I compiled. Who am I to disagree?

Lukas Fesca in particular was so kind to create a game in which you can choose which eleven, in your opinion, is the strongest.

Here are the results: 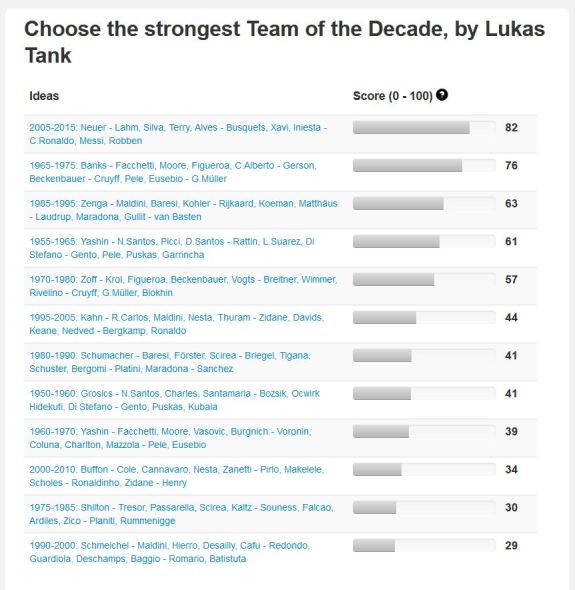 I agree with most of the selections, especially with the collective verdict that ’05-’15 and ’65-’75 are the two front-runners and that there is very little separating them.

Thanks again to Lukas Fesca!

END_OF_DOCUMENT_TOKEN_TO_BE_REPLACED

For the last two years I’ve watched my way through (male) football history. I wrote about what I saw in a series of blogposts on Teams of the Decades. Starting in 2015 and working my way back in five year steps, I concluded that project this April with the Team of the Decade 1950-1960.

This blogpost is the second and final one of a mini-series of extra blogposts that are intended to bring closure to the whole project. In the first one I compiled what I think is the best team in football history. In this one I will write about who is, in my (hopefully educated) opinion, the best football player of all time, whereby “all time” is defined as 1950-2017. (Impossible to judge before that.) END_OF_DOCUMENT_TOKEN_TO_BE_REPLACED

During the last ten years I’ve watched my way through (male) football history. At first I did so without any specific plan. Whatever got me interested landed on my watch list. But during the last two years my viewing schedule got more structured. As many of you will know, I’ve compiled Teams of the Decade and published them on this blog. Starting with the 2005-15 team, I have worked my way back in five year steps to the 1950-60 team. After that I stopped because the lack of footage for players before 1950 makes it impossible to form an opinion on them that is truly my own. Working on this project meant that I had to watch many more matches in order to form an educated opinion on the great players of the past. By now I think I have a decent knowledge about football history. END_OF_DOCUMENT_TOKEN_TO_BE_REPLACED 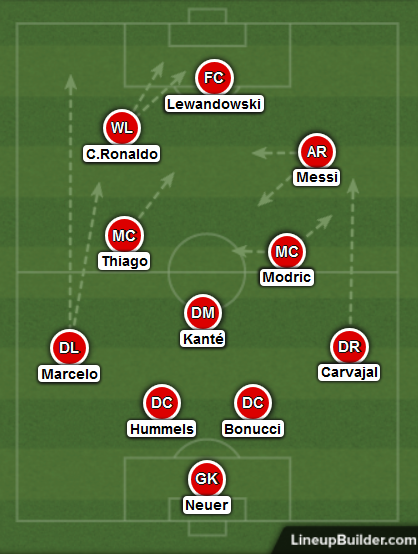